Biannually, the NHRC of Mongolia organizes a meeting with the civil society organizations in order to collaborate with them in wide range of areas in promotion and protection of human rights and freedoms as well as to hear their voices. On 4th December 2017, the 14thMeeting on "Partnership between the National Human Rights Commission of Mongolia and the Civil Society” was held within the framework of human rights campaign aimed at commemorating the International Human Rights Day and the upcoming 70th anniversary of the Universal Declaration of Human Rights. 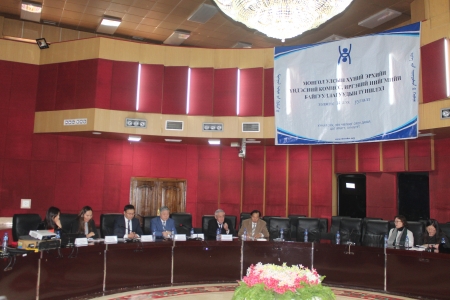 At the meeting, the Ex-Officio Board[1] of the NHRCM has presented its implementation for 2014-2017 plan and presented the newly appointed members of the Ex-Officio Board as the term of former members of the Board has terminated. Currently the Ex-Officio Board consists of 19 representatives from NGOs, academia, trade unions, international organization, and media working in many different areas including the rights of children, women, men, elder people, youth, persons with disabilities, sexual minorities, ethnic minorities, and detainees as well as the issues related to health, education, religion, and environment and mining. Whereas the NHRCM has made a presentation on the activities that have been implemented in 2017 as well as its next year’s priority areas.

As a result of the meeting, participants from diverse NGOs including the Mongolian Human Rights NGO Forum have discussed the work plan for 2018 and have expressed their interest in collaborating with the Commission in the following areas:

-Conduct a joint-study on rights of elder people;

-Co-organize a campaign activities aimed at implementing the Government resolutions derived from the Commission’s recommendations reflected in its annual human rights reports on situation of human rights and freedoms in Mongolia; and

-Undertake a joint inquiries and study on sexual health and reproductive rights of girls with disabilities and women.

[1] According to the Law on the National Human Rights Commission of Mongolia, the Commission can have an advisory board consisting of representatives from civil society organizations that work on human rights issues. The board plays an important role in ensuring the multilateral representation in the Commission’s activity.