Urgent need to revise the Labour Law of Mongolia

The National Human Rights Commission of Mongolia (NHRCM) jointly with the International Labour Organization (ILO) have organized a high-level consultative meeting on "Revision for Mongolian Labour Law and Implementation of Labour Rights of Employees in Private Sector” on 06 December 2017. This high-level meeting has covered the implementation status of international conventions on labour rights to which Mongolia is a party, and discussed about necessities of revising the Labour Law as well as challenges in labour relations. 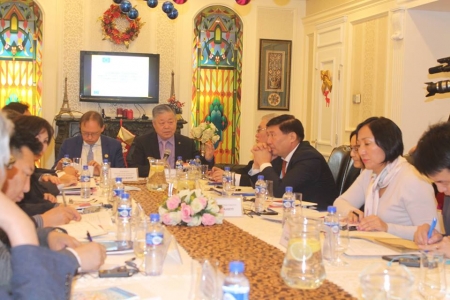 Mongolia has a responsibility before the international community to abide by the ILO eight core conventions. The participants of the high-level consultative meeting have emphasized the importance of role and responsibilities of Government, employers as well as trade unions in ensuring the fundamental principles and labour rights at work.

In this globalized era, Mongolia faces a need to ensure the fundamental rights and freedoms and fundamental principles during the course of service and industry and to implement the obligations of economic, social and human rights in order to keep up the pace of world market, international trade and network of value.

The participants have discussed and agreed to take following measures in order for Mongolia to fulfill its obligations before the international community:

-To conduct a study and analysis on implementation of international labour norms and standards;

To ensure coherence between the Government, employers, and trade unions in allocating necessary budget; and

-To revise the domestic laws immediately, particularly the Labour Law.

The NHRCM undertook a study and survey on the status of right to labour of public servants and employees in private sector as well as the labour rights of military officers and conscripts in 2016. The NHRCM have included above studies in its 16th Annual Status Report on Situation of Human Rights and Freedoms in Mongolia. Based on these studies, the Commission concluded and provided recommendations to the Government to revise the current Labour Law and other relevant regulations in order to ensure the labour rights of people working in both public and private sectors.

After nine years of pending revision of Labour Law and consistent advocacy efforts of the NHRCM, civil society and international organizations, this high-level consultative meeting has led to a shared understanding of urgent necessities for revising the current Labour Law among the delegates, particularly the Parliament Members. Possibly the Labour Law would be revised within the year of 2018.

Following this high-level consultative meeting, a study report on "Some issues related to the labour rights in small and medium enterprises: Trade, and wool and cashmere sector” was discussed among the enterprises, employers, trade unions, government organizations and civil society organizations that were involved in the study.

The National Human Rights Commission of Mongolia, with technical support of the European Union and the ILO, has conducted a study on implementation of fundamental principles and labour rights of small and medium-size enterprises that engage in trade, and wool and cashmere sectors. As a result, the study report was published and distributed to the relevant stakeholders and public.