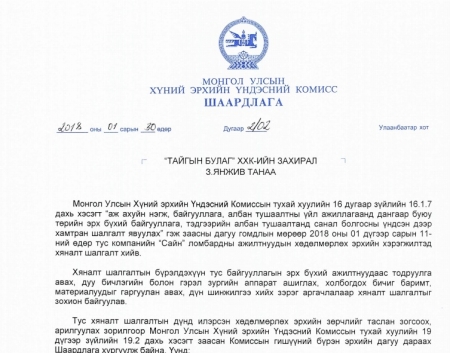 According to the article 16.1.7 "to conduct alone an inquiry into the activities of business entities, organisations or officials, or jointly on the basis of a proposal by the competent State authority and their officials” of the Law on National Human Rights Commission of Mongolia, and pursuant to a complaint lodged to the Commission, complaints officers headed by Commissioner Ganbayar Nanzad conducted an inquiry into activities of "Sain” Lombard in relation to the labour rights of employees of the company concerned on 11 January 2018. In line with article 19.2 of the Commission’s law, "Commissioners shall write and deliver demands to relevant organisations in order to restore human rights and freedoms and eliminate the violations if he/she has considered that business entity, organisation or official has violated human rights and freedoms”, Commissioner Ganbayar Nanzad has delivered the following demands in relation to the violations of labour rights:

- The company concerned asks new employees to be involved in an apprentice training, which costs 550.000 MNT, to gain their knowledge and experiences in loan on pawn. If employees, who have participated in the training covered by the company, leave their workplace within 5 years, then they should compensate their own training cost of 550.000 MNT as stated in the internal rules of the company. However, the company does not give any professional certificates to those who have participated in the training since the training itself was not accredited by any professional organization. Therefore, these rules have also violated the Labour Code and the Commissioner demanded the employer to revoke a provision related to this training.

- The inquiries revealed that the company has made requirements for employees that constitutes a forced labour according to the ILO Convention 29, to which Mongolia is a party. For example, the employer confiscates an original version of tertiary education diploma of employees when hiring them. Thus, the company should give their seven employees their own tertiary education diplomas back and should not repeat this kind of act again.

The company concerned should respond to the Commission on activities that they have taken to remove these violations of labour rights within 7 days.